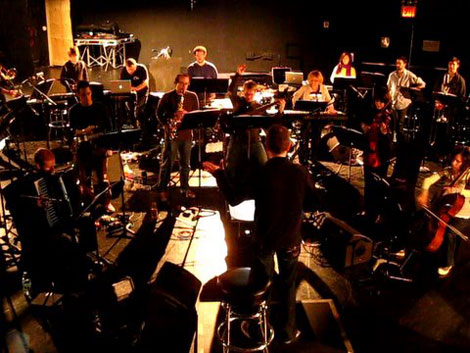 Next month, I will graduate from the U of MN with a Masters degree in trumpet performance. My studies in my Masters program have been primarily in the classical trumpet field, though I did serve as the jazz theory TA for a semester, and have taken jazz comp lessons for three semesters (I have a BA in Jazz Studies). So when I say “If I were a classical musician….” I mean to say that I do not identify as a classical musician because the majority of the playing I do professionally is in a jazz setting.

So…If I were a classical musician, I would be treating my art as if I were a jazz musician. Jazz musicians are self-made performers. They grind it out searching for clubs that will have their music and pay them a little money to play it. When they’re not playing a gig, they’re likely practicing, transcribing, rehearsing or blogging about their art. They are visible, and they treat themselves sort of the same way a rock band might. You promote your music, play in clubs, and try and build a fan base. Really, jazz musicians look at themselves as independent musicians. Period. Not “jazz musicians,” just “musicians.” This at least does away with all the recent “jazz is dead” talk, and allows you to simply function as someone who makes good music. If you make good music, and you believe people will enjoy it, then who cares what it is called?

So why are classical musicians not acting this way?

In New York City there is a night club that is the new craze. People are lined up around the block every night to get in, but it isn’t your usual club mix thumping through the open front door, it is the sound of a string quartet playing a piece by Mozart, or a brass quintet playing the latest Samuel Adler work. It’s a club for classical musicians, and it really is a club. People sit at their small tables, sip a cocktail, and enjoy the prestige of listening to something a little more high brow than the latest Cee Lo Green hit. The club’s mission is to bring in great music, no matter what the genre. Their list of artists who have performed there includes the Calder String Quartet, Philip Glass, Steve Reich, Arditti Quartet and many other well-known and not-so-well-known classical groups. It also includes some bigger names in jazz and hip hop, including Brad Mehldau and Mos Def.

Surprisingly, clubs like this are not popping up all over the country, despite this one’s success. Obviously not all clubs of this nature can be successful enough to bring in such huge names. Location is an issue and bringing in Philip Glass from NYC is different than bringing him in to Minneapolis. Regardless, it’s clear that there is an audience for this type of thing, and it’s a wonder why no one has tried to duplicate the concept in some way.

Can’t afford to spend $60 on opera tickets? Come hear so and so sing all the arias from Gluck’s Iphigenia. Don’t like having to dress up to see your friends play in the orchestra? Come check out their Woodwind Quintet hit it at a local music cafe or bar.

Why the hell not?

You know why people look like a deer in head lights when you talk to them about playing classical music? It’s because they’ve seen classical music even less than they’ve seen jazz. If the scene isn’t working, why not change the game? Classical musicians, orchestras, operas…they’ve all experienced a drop off in attendance. The natural reaction is to find more donors, tighten the belt, and stick to the old classics, but that audience is literally dying off and we’re doing nothing to make sure this art stays alive.

There are some orchestras that are known for being cutting edge and are bringing in more people, but the majority are in the middle of a downward spiral that is accompanied by Beethoven’s 5th and the Nutcracker Suite. Do yourself a favor and do something different. The opportunities for classical musicians are endless, all it takes is a little initiative.

3 thoughts on “If I Were A Classical Musician”