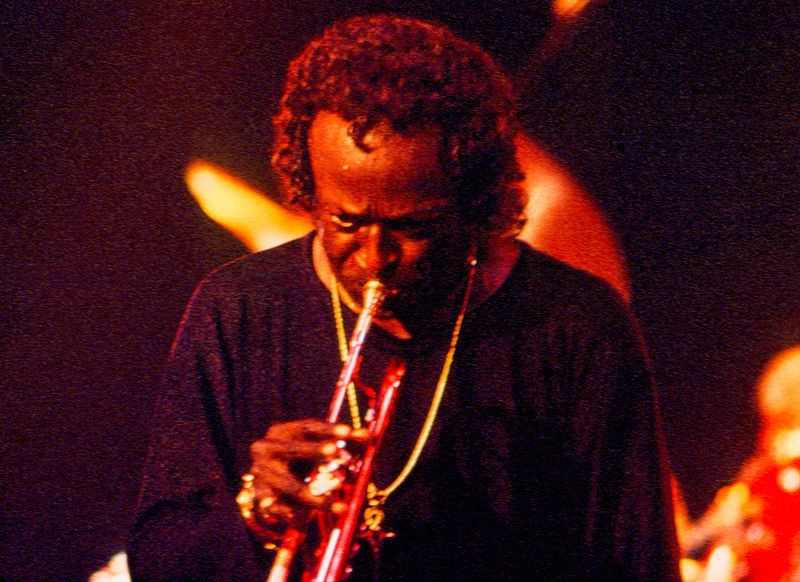 Today’s awesome guest post, which looks at four different Miles Davis solos over the same tune, comes from trumpeter John Raymond. John has a new album coming out so be sure to check it out on his website!

A little bit ago I did a transcription research project on Miles Davis doing the tune “Walkin” four different times over the course of the first part of his career. The recordings I transcribed were:

A bootlegged performance of the same band occurring in the early 1960s: Download the transcription

My transcription of the original recording of Walkin’ serves mainly as a foundation for comparing and contrasting from the three other transcriptions in the study.  Specifically, much of the analysis seeks to devote special attention to the evolution of Miles’ harmonic concepts and motivic contrast, particularly displaying that his extended use of chromaticism was a clear departure from standard bebop language and that his motivic contrast was a mainstay in his style through the years.

First, Davis’ harmonic concepts in all of the 1960s recordings studied displayed an abundant use of chromaticism. Simply put, chromaticism deals with moving chromatically from note-to-note as opposed to moving linearly or in a scalular way. While there are portions of chromaticism in the bebop language, the majority of eighth note lines move scalularly from chord tone to chord tone, providing a smooth connection between chords. This can be seen very clearly in the original solo from Walkin,’ particularly in Davis’ third and fourth choruses as he weaves smoothly in and out of the chords using scalular as well as arpeggiated figures.

In contrast, the majority of the eighth note lines that Davis plays on the Black Hawk, Four & More and bootlegged recordings do not move or resolve in a bebop-based way. Whereas scalular bebop lines are defined by clarity and smoothness, Davis’ chromatic lines can be defined as ambiguous and rough or jagged (both in the line itself and the resolution of the line). This makes it very clear that Davis is thinking very differently about harmony in comparison to a bebop musician – there is no clear destination, nor is there a clear route to the destination. Rather than producing linear and symmetrical phrases, Davis’ lines seem to suggest shapes and colors that he is intending to create. This painter-like conception marks a clear departure from the conventional bebop language and is one of the major contributions Davis has made to the jazz language as a whole.

Davis demonstrates his chromatic playing primarily through the encirclement of notes from both above and below. This was a very common technique in bebop language, as musicians would encircle chord tones in order to resolve them on strong beats or to displace them off the beat. However, in Davis’ playing, these encirclements were used so frequently that his lines were consistently ambiguous in their direction or resolution. There are two primary ways that Davis typically displays his use of chromaticism: 1) descending from the extreme upper register, encircling every note in the chromatic scale on the way down, and 2) restraining his lines to the lower to middle register consistently. These two ways are most clearly seen in the following examples**, broken down by recording:

**Note: because so many of Davis’ eighth note lines in the three 1960s transcriptions researched are chromatic in nature, this researcher has not provided an exhaustive list in this analysis.

It is also worth noting how much more frequently these lines occur as Davis evolves over the course the recordings, showing his continued pursuance of this alternative approach to harmony. It is very clear that Davis’ use of chromaticism is one of the major facets of his playing in this period, and the effects that this approach to harmony had on the stylistic direction of the ensemble and the music as a whole is undeniable.

While Davis’ use of chromaticism in the three 1960s recordings is a stark contrast from the original 1954 recording, a definite comparison can be seen from the original transcription and the other three studied regarding Davis’ motivic contrast. Davis was a master at creating themes that, when put alongside of each other, contrasted each other very distinctly and yet complimented each other beautifully. His themes weave together in a story-like fashion, creating multiple different moods and colors over the course of a given solo. This is clearly seen in the third, fourth and fifth choruses of the original recording. Here Davis moves from a running triplet line (third chorus) to a simple, major melody and into a complex, bebop-based sixteenth note line (fourth chorus) and finally to bluesy, simpler eighth note line (fifth chorus).

Davis’ mastery of motivic contrast is a trait that stayed with him over the course of his musical career, and it is seen clearly in the other three transcriptions. Rather than displaying all of the instances of motivic contrast in the other three solos, I’ll attempt to highlight the various different motives used, seek to define/explain the motive, as well as list specific places where they are used in each solo, with the overarching idea that all motives contrast each other at given points throughout the solos.

**Note: there are less major sounding motives as Davis evolves

BLUES MOTIVES
*Any motive that is centered on the blues scale

CALL & RESPONSE MOTIVES
*Any motive that Davis employs that signals the rhythm section to respond in a given way. These motives include:

2) An ending cue that signals the conclusion of the solo

Live at the Black Hawk: ninth into the tenth chorus

*Note Davis’ extension of this motive from solo to solo

I’ve transcribed lots of Clifford Brown solos, for example, but it was a completely different experience to transcribe someone on four different versions of the same song throughout their career. In doing so, I think it’s easier to isolate specific areas of their improvising because you’re eliminating a very important variable (the differing of tunes) that often can play into how a musician approaches his improvising.

Regarding these transcriptions, it’s no doubt that us musicians consider Miles one of the greatest improvisors ever. But these transcriptions highlight his greatness in a very unique way by showing off Miles’ alternative approach to harmony as well as his masterful use of motivic contrast. It goes without saying that the effects that these stylistic traits have had on the jazz language are too numerous to count, and this is precisely why Miles’ contribution to the evolution of the music cannot be understated. Hope you enjoy!