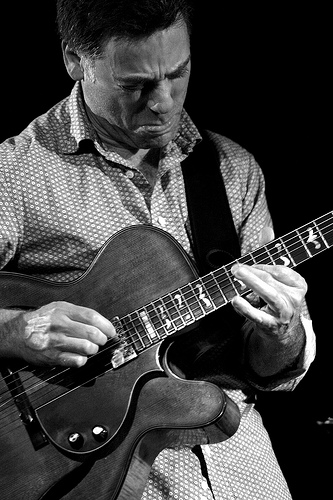 Peter Bernstein plays jazz guitar the way I love to hear it played. Even with the wealth and density of harmonic and rhythmic concepts he employs, its all feel. Nothing takes precedence over feel, and its uniquely his own.

This solo holds some trademark examples of guitarist Peter Bernstein’s style. He consistently lays back on the beat, not so much that he’s behind, but enough that there is a feel and groove to even the heaviest, most rapidly executed of lines he plays. He’s riding the tune as opposed to propelling it. Monk tunes certainly offer plenty of harmonic content to color over, and Bernstein’s note choices, while also often typical of his playing, are never cliched nor lose their poignancy to repetition. The large intervallic leaps, double stops, and the augmenting of his lines with chord fragments are all put to great use here, and offer something that is just incredibly musical to me. Bernstein’s dynamics make for incredibly lyrical phrases, again, even when harmonically dense.  Its not line after line, there is a story, a feel, and no rush to complete it.

Case in point, after the solo, Bernstein floats a kind of chordal chorus, harmony fragments, washing around with the drums and in between the bass. It offers the tune a chance to catch its breath and honors its harmonic vibrancy before hitting the head out. Its all feel and vibe here, something Bernstein always seems to exhibit whether playing original compositions and standards with the Goldings, Stewart organ trio or Monk tunes on this beautiful record, entitled “Monk”.

The way he plays off the rhythm section, and the hit soy the tune throughout the 5 choruses or so he takes is brilliant. The tune’s structure, as dictated by the melody, is full of odd hits. The rhythm section continues marking these throughout Bernstein’s solo, with Bernstein only at times joining with his phrasing, making for a solo that floats over the top of the tune. Measures 42 and 66 are both good examples of Bernstein marking the hits of the tune with the rhythm section. Its easy to get the beat turned around, with a strong emphasis on the 4 of measure 42. Other examples throughout the solo. Clearly this tune, “Played Twice”, a difficult one, had been internalized prior to this recording. There’s no hesitation.

Bars 9 through 12 of Monk’s “Played Twice” sit on an F7 chord, and each chorus is an adventure in Bernstein’s solo, how he lands there, or avoids the sense of weight and stagnancy by the lack of harmonic motion is brilliant. The dominant chord is almost always treated as altered, Bernstein loves the flat 9. He hovers around chord tunes for a couple bars and then hangs in the upper extensions of the chord. Measures 42 – 45 are about as inside as he gets on the F7 passage, playing two bars of chord tones, and the 11, and a #9 that is resolved to a 3rd, before jumping into a passage of thirds marked by the flat 9 on the beat 1. Hurts nice.

The 16th note triplet motif that begins in measure 18 is another of the solo’s most memorable moments. A relatively simple motif, Bernstein skips it around, not played as a pattern, but the tones played adjusted to imply specific harmonic information. All too often as guitar players we fall into a pattern, Bernstein is clearly thinking tonally, musically, over physically. The run from measure 18 to 25 serves as evidence, if not the solo as a whole.

The whole thing is beautiful, many moments to pick apart, enjoy!

[Editor] – Big thanks to Todd for sharing this transcription with us!  Be sure to check out Todd’s website at www.toddclouser.com.  His group ‘A Love Electric’ just came out with a new album and is touring all over the place so please give them some love!