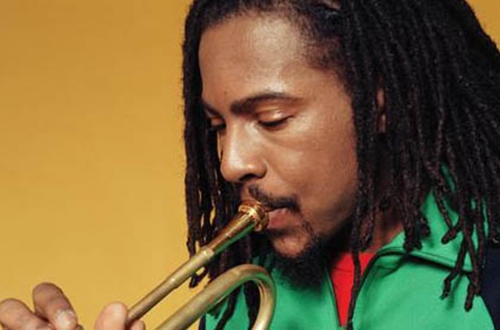 Roy is one my favorite trumpet players of all time. His mix of hard bop and soul/gospel in his playing is exactly where I want to be as a player, so I tend to listen to a lot of (too much?) Roy. This tune is no exception. It’s from his record Earfood, which is pretty much a standard quintet record, except it has this track on it, and this track really just blows away the rest of the album, as good as it is. Everyone on the record plays great throughout, but it’s like they were all born to play this tune. Each solo builds on the last creating a track that ebbs and flows just right, until you’re hitting the back arrow on your ipod to listen again.

I wrote out the changes to the tune, but I am not sure they are 100% accurate. It’s a basic framework that should do for our purposes because for once, the changes really don’t matter much (yay!). This tune isn’t about cutting up changes, it’s about developing melodies over a (mostly) diatonic chord progression.

The “it” in Roy’s solo is his timing. If there is one lesson you should learn from this solo it is to resist the urge to play lots and lots of notes and licks. RESIST! Hargrove uses so much space developing melodies in this solo it makes you wonder if you’ve ever approached improvising this patiently in your life. It would be very easy for Roy to blow his Roy juices all over this groove and just plaster everyone with his awesome-ness, but he resists, and instead develops theme after theme, and waits until just the right time to play a longer 16th note run.

I toured with a Big Band when I was 15 and there was this pianist from Detroit who toured with us. His name was Eddie Brown and I think he was like 16 or 17 on this trip. He was already playing circles around everyone including most of the faculty at the camp (for the life of me I have no idea where he is now), and he said something to me I never forgot. I think I asked him something ridiculous like “duhhhh how’d you do that?” after one of his solos and he said something like “you have to be patient. There is a lot more time in an 8 bar solo than you think.”  I hear those words running through my head before every time I improvise. “Be patient, you have more time than you think.” Then I started listening to classical composers and the greatest jazz improvisers and realized that’s exactly their approach.

Roy’s solo shows that a 24 bar solo can feel like a 90 minute symphony if treated the right way. I learned this solo by ear a few months ago and figured it was about time to write it down. It wasn’t until now that I realized how short this solo really is. But don’t let the length fool you. There is so much to learn from in this short solo that it’s hard for me put it all in to words.

Right off the bat Roy introduces a theme and develops it for the first 4 bars. he brings it back for further development in mm. 21 & 22, and simultaneously develops a few other motifs. He builds up anticipation for the climax of the solo which takes place at approx measure 15, and from there out the energy and note volumes increase. Every time that F7 rolls around as part of the turnaround to the top of the changes, Roy alters the hell out of it. The first time the chord comes he plays the #11, the next two times he builds his improvisations off of the b9, or the diminished triad F#, A, and C (concert key). What makes the F7 so cool though, is that in a mostly Ab diatonic tune, the F7 stands out like a sore thumb and is almost shocking in it’s color. It makes total sense since the groove is build off of the ii chord (F7 is the V7 of Bb), but it still sounds so colorful.

If nothing else, go buy this track, go buy this record, and memorize this solo. It will do you some good to get some of whatever it is that Roy has, trust me.