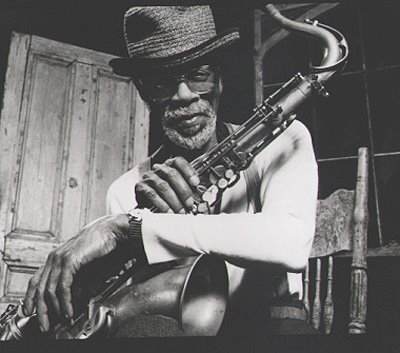 [Special thanks to Kevin Sun for today’s guest post.  For more of Kevin’s transcriptions and articles, be sure to check out his website at www.thekevinsun.com/]

From Kenny Garrett’s Black Hope (1992), Computer “G” is a 12-bar blues in F that has a simple melody based on ascending and descending stacks of perfect 4ths.

Joe starts his solo with a simple motif at B that he displaces rhythmically over the first few bars. He uses syncopation and repetition to develop this idea—basically 5-#4–5–1—in a way that’s swinging but not predictably so.

At C, Joe begins to break away from his opening motif by playing longer lines and arpeggios—check out the clearly outlined tritone sub in the 4th bar of C. Joe gestures towards his opening motif in mm. 31-2 and throws in a trademark trill in mm. 33-4 (can you think of any other tenor players who use trills as reliably and as tastefully as Joe?).

A tritone sub in m. 36 leads into D, in which Joe continues to play broader phrases that span multiple octaves (mm. 37-39 travel nearly two entire octaves in tritone-sub arpeggios). Check out how Joe articulates the phrase in mm. 47-8—ghosting and swallowing some of the notes—leading into E.

Joe plays patiently but keeps referring to the previous ideas he’s declared: mm. 60-64 recall mm. 33-36 a few choruses back. At G, Joe starts to experiment a bit more with the harmony and takes a simple motif (b3-1-3-4) and moves it around in different chordal contexts.

At H, a couple whole-tone ideas sweep Joe’s lines from the bottom of the horn to the very top. His line in mm. 93-94 is especially interesting: he takes a couple chordal ideas and superimposes over the ii-V, playing (II7 – III7 | bIII7 V7) in place of ( ii | V) to resolve. Each of the substitutions voice leads smoothly by a step or a whole step, which is a clever technique that can be used creatively in other contexts, like static modal harmonic.

I is a bit of a breather — Joe keeps moving along playing clear melodic ideas— and in J, he picks up the pace again with a continuation of the whole-tone sound he played at H. By K, Joe’s hit his stride and is playing melodies constructed from wider intervals that refer both to the melody of Computer “G” and earlier ideas that spanned the range of the instrument.

M and N bring Joe back to some more “inside” playing, changing the sonority of the ensemble sound. Charnett Moffett’s relatively high bass-lines against Joe’s syncopated figures in N is a nice contrast to the denser sonic texture that came before.

In O, Joe wraps up his solo with a final recapitulation of the whole tone ideas he’s played before passing the baton to Kenny Garrett, who plays off the idea Joe had developed a bit back in G.

One point of interest: note how clearly Joe outlines the harmony he’s hearing with arpeggios and stacks of intervals throughout this solo. Part of the reason for this may be because of the trio setting, i.e., Kenny Kirkland’s sitting out on this tune allows Joe to stretch out and imply a number of different sounds (whole tone, various substitutions) at the cost of putting a greater burden on him to make the harmony and form clear for listeners. This particular solo, recorded later in Joe’s career, is remarkable for its clarity and its patient development of ideas; an instructive contrast might be to check out Joe’s playing over “In ‘n’ Out,” another 12-bar blues in F from the ‘60s when Joe stretches out with McCoy Tyner, Richard Davis, and Elvin Jones.