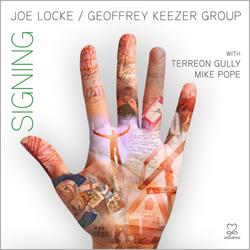 This is a really, really cool tune, and I’m really excited to have the opportunity to transcribe a solo that also has video, which we can include in full on the site.  So cool of Joe to let us share this with all of you, and congratulations to him on the release of his new album (click the image to navigate to his online store).

First of all, Joe Locke has incredible mastery over rhythmic modulation, which means that he is able to accurately divide a quarter note value into 3, 4, 5, 6, 7, and 8 equal-length notes and switch between these divisions fluently.  This highly developed skill is a big part of what makes Joe Locke’s improvisational style so creative and technically stunning, and difficult to notate!  GAH!  And as if it wasn’t enough, Locke takes this skill one step further by locally stretching and contracting time, so that a lick might sound like a 16th-note triplet, but ends up occupying the space of three 32nd-notes.  I’ve dealt with this kind of playing before in small doses (one or two instances in a solo), in which case I picked what I thought was the most intuitive way to write it and moved on–but in this solo I ran across 8 or so instances of rhythmic ambiguity that I just had to notate 2 ways.  In most cases I wrote what I thought was the most intuitive interpretation on top (stretching/contracting implied), and the more literal interpretation below, although not necessarily.  And it’s worth stating and re-stating that solo transcriptions do NOT attempt to describe what was actually going through a musician’s head when they were soloing–this site posts transcriptions as a listening/playing aid to supplement the listener/player’s depth of musical understanding.  So in order to improvise lines with crazy rhythmic modulation at this speed and fluidity, rhythmic modulation has to be 2nd nature.

Another aspect of Joe’s playing that sets him apart from the crowd is the various instances of ‘out’ notes, which often occur in clusters of 3 or 4 notes–and by ‘cluster’ I mean a group of chromatically adjacent notes.  I’ve marked a bunch of instances on the analysis as “clust” in mm. 8, 11-12, 14, 19, 27, 31 and 37.  This clustering technique is more subtle than just chromaticism, as Joe makes the choice of where to put these clusters in the scale, dragging a bit of ambiguity across specific scale degrees.  And after ‘going out,’ Joe often resolves back into E minor blues, and specifically brings back similar resolutions at mm. 9, 15, 20 and hints at it in m. 38.

Another really cool thing to look at is the groupings of 32nd notes in mm. 33-36.  The placements of accents, which are mostly on the higher notes, indicates a very wide variety of syncopations and would be really cool to map out.  Totally would if I had time but I have a life outside of transcribing too! 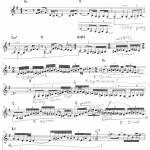 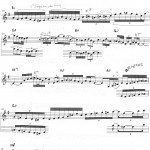 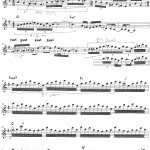 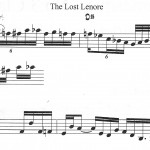 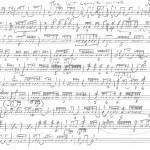