This track grooves so hard I can’t possibly sit still while I listen.  It’s the way Hollenbeck employs distinctly different snare drum timbres and perfectly compliments the utterly simple descending bassline, and then Moran’s vibes solo floats effortlessly over the top and constantly subverts the swung 4/4 feel with 12/8 and straight 4/4 references.  This tune is incredibly special because it is a hard-grooving lament in memory of Matt Moran’s late father, Tom; have you ever heard of a hard-grooving lament?  No, me neither.

The ‘lament’ effect of this piece is achieved by employing a very slow (but still driven) tempo of about 55 bpm, it’s in A minor, and the whole thing is built on a descending bassline which is simply an A minor scale from tonic to tonic.  This could loosely be considered a ‘chaconne,’ ‘passacaglia,’ or ‘ground bass,’ which is basically a theme and variations set to a repeating bassline.  While Moran’s solo doesn’t stick to the formal structure of a classical theme and variations, Moran develops motives and interacts with the underlying texture in a way that achieves much of the intention of said musical form.

— On an editorial note, I decided to notate the solo in 12/8, not because the tune is actually in said time signature, but because I think it’s the most accurate way to write Moran’s lines.  I could have also written it in 4/4 but there would have been so many more tuplet markings necessary it would have been even more of a mess.  And with very few/no exceptions, there are no actual rests in this solo, as every note is allowed to ring until the next articulated pitch.  I notated these held notes the way I did to try and promote clarity and save a little space – I’m sure if I were a pianist I’d have notated it differently.–

Another point worth noting is that the 8-measure ground bass pattern is broken at m. 75 where it starts over after only 4 measures.  The next time through the progression the bass continues down two more steps and lands on an F for 3 whole measures (which desperately wants to resolve down a 1/2 step to E) while Moran closes out his solo with a contemplative figure that features a maj. 7th relationship between E and F – an inversion of the 1/2 step motive which has pervaded the entirety of the solo.  COOL! 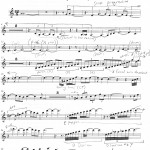 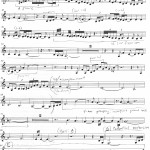 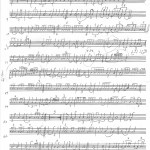 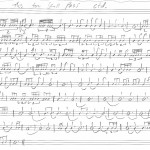 As you can see from my handwritten rhythmic transcriptions I originally notated it in 4/4, then translated into 12/8.  It’s mostly the same, just written differently (and the first chunk of the 12/8 is missing).