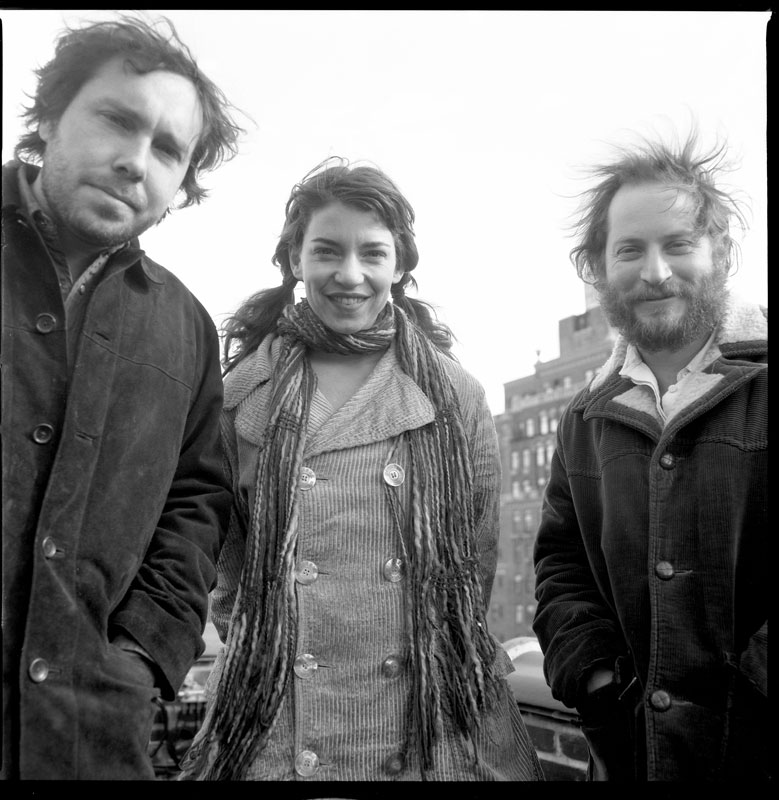 This is one of my favorite tunes on the album for its cleverness, lopsided time signature, and killer solos!  Rob Burger absolutely tears it up and Carla Kihlstedt swoops in and picks right up where he leaves off, both of them navigating 5/4 time like it’s their respective jobs.  Which it is.  So there you go.  This tune has a very simple chord progression and A/B form which balances out the quirky time signature–and the tuba does a very clever hemiola bassline in the B sections (mm. 17-18, 21-22, 49-54) that’s just charming as hell, and really caught me off guard ten times I listened to it.  The combination of simplicity, innovative quirks and killer playing epitomizes the impression I get from this whole album, so if you like this track I STRONGLY suggest buying the whole album.

When I sit back and listen to these two solos I just hear perfection and I’m blown away, but it turns out there’s a lot more going on behind the scenes beyond just playing all the right notes.  One thing that Burger does right off the bat is to begin his first measure with a non-chord tone (B natural), and he emphasizes B and E before resolving to A on a weak beat in m. 2.  He does this again in m. 3 and finally hits A on the downbeat in m. 4 (although he weakens the cadence by immediately stepping down to E on beat 2).  On a smaller scale, and to a similar effect, Burger uses many appoggiaturas, which means landing on a non chord tone on a strong beat and resolving (up or down) by step to a chord tone.  The function of an appoggiatura is to delay ones landing on an expected note by placing an unexpected note on the strong beat, which resolves to the note you’d expect.  This happens many times throughout his solo (mm. 1, 8, 17, 18, 19, 22, 27) and serves to further complicate the already odd time signature by diminishing  the strength of the downbeats a little bit.  Another key characteristic of this solo is all of the 16th-note triplet ornamentations (mm. 1, 6, 7, 10, 12, 14, 21, 22, 23, 29, 30), which add energy and charm to the solo without a lot of unnecessary notes.

The simple chord progression calls for simple language, and Rob sticks mostly to diatonic, pentatonic and blues scales, although not always in straightforward or predictable ways.  For example, m. 10 is very clearly a blues lick but he throws in the raised 7th (G#) to combine the blues flavor with the functionality of melodic minor.  There is also very sparing use of double stops in this solo, which is most often diatonic harmonization in 3rds/4ths (mm. 16, 20, 24, 25, 29, 31-33), and some of the most magical moments are when Burger combines the above techniques such as appoggiatura+double stop (mm. 17, 19, 25, 29).

The hand-off between Rob and Carla is about as seamless and musically interesting as it gets; Rob ends his solos with 2 bars of hemiola which mimics that of the accompanying tuba in mm. 17-18 and 21-22, which is basically playing a measure of 5/2 over 2 bars of 5/4.  If this was an even time signature and he did the same thing (ex: 4/2 over 2 bars of 4/4), the effect would be lost.  But the thing about 5/4 is it’s grouped in two uneven-sized chunks–in this case, it’s grouped as: dotted half note + half note, or 3+2.  So when one superimposes [2+2+2]+[2+2] over (3+2)+(3+2), it sounds WAY funky.**  And that’s what Rob is doing in mm. 31-32.  So what this DOES, is kind of obscure the meter and create uncertainty as to where exactly the next downbeat will be, which is the first beat of Carla’s solo, and she picks right up where Rob leaves off (correction: the last note of m. 32 is a 4th higher than written (G5) and Rob plays a double stop (C5+E5) dotted half on the downbeat of m. 33–oops).  So not only is the hand-off PERFECT, but Carla answers Rob’s half-note hemiola with some CRAZY syncopation.  Try singing along for the first 8 bars w/o looking at the music and see how many times it takes you to memorize what the hell she’s doing.  Carla could have just ignored the time signature completely and played random syncopations to a similar effect, but I promise you that she knew EXACTLY where the beat was, which allowed her to land squarely on her feet in mm. 36 and 40.

So after starting off her solo with some amazing rhythmic acrobatics, Kihlstedt settles in for the duration of her solo, utilizing some of the same language as Burger (appoggiaturas @ mm. 37, 47, 48; and blues language @ mm. 35-37, 47-48, 53), which makes for great continuity.  She ends her solo similarly to Burger with a crazy hemiola (mm. 55-56) but in this case it’s a much more exotic sequence of dotted quarter notes, with a quarter tacked on at the end to finish it out.  This could be described as (1.5+1.5+1.5+1.5+1.5+1.5+1) over (3+2)+(3+2).  I also hear it as 12/8+8/8 over 5/4+5/4, but you can take that with a grain of salt.  Either way, the rhythmic mastery with which both of these players craft their solos absolutely blows me away, and has seriously influenced how/what I practice in order to hone my own rhythmic vernacular and conceptualization.

It’s also worth noting that Carla overdubbed a 2nd violin part in mm. 48-58 which adds a beautiful texture, and in my opinion, draws attention away from the original track between mm. 51-54.  Again though, it adds some really cool continuity between the violin and accordion solos, especially right where it comes in at mm. 48-51, and I think it was an awesome post-production decision, although I also think that the solo would have functioned fabulously if left untouched. 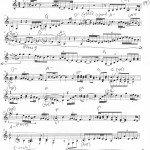 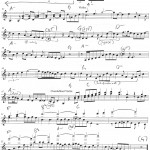 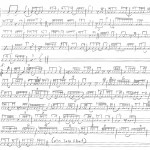 “GT” = Guide Tone (third/seventh of chord, which often serves as jumping-off point for a line)