This is the third transcription I’ve done in a row featuring Stephane Grappelli, and after this one I’ll do something different – but this trifecta of violin solos was just too cool to pass up.

Michel Warlop’s solo is first, and I’ve got to say that the overwhelming impression I get is straight up manic.  All of his longer 32nd note runs are a mixture of diatonic scales/arpeggios and nonsense (mm. 3, 8, 15), which can only be expected at those speeds.  His lines are also pretty angular with crazy virtuosic leaps thrown in all over the place (mm. 3, 5, 10, 16!), which are quite alarmingly accurate but in my opinion, not incredibly musical.  He throws in a little syncopation here and there (mm. 7, 10, 15) but nothing too inventive, and there’s not a lot of melodic content leaping out at me from within all the scales, arpeggios and blues licks.  His phrasing and articulations are very nuanced though, which one would expect from a virtuoso violinist of his caliber, but I’m put off by the flashiness, which could just be my personal preference.

Grappelli’s solo is a huge contrast from Warlop’s, first of all with his smoother tone quality and more relaxed feel, but the other thing that sticks out right away is his use of the flat 7th (F natural).  Actually, it’s his first downbeat (m. 17) and he seems to favor it over F# throughout the solo (mm. 18, 22, 26, 29), at least when playing over a G6 chord.  I spent a little time looking/listening to see if he quoted any of Warlop’s lines and only noticed one commonality, which is the last 5 notes of mm. 1 and 17, respectively.  This doesn’t look like a coincidence, but it does strike me as a very convenient, ‘violinistic’ thing to play, which would make its transmission very likely.  I also have marked in the analysis a really cool chromatic figure that Stephane uses a number of times (mm. 19, 28, 31) and is worth taking a look at.  Actually, I love all of m. 19 so check it out.  It’s also worth noting the switch between triplet and quadruplet in m. 20 which allows the chromatic run to land on a D on the next downbeat.  He must have intuitively known that beat 4 needed to be a tritone away from his target note if he was going to play 16th 6tuplets.  What a beast!

Eddie South must have had a really fantastic sense of humor because the beginning of his solo is both hilarious and really really smart.  The parallel 5ths are very silly and kind of pathetic-sounding (if not perfectly in tune), but then he hustles up to the high G in m. 36 which was the highest note of Warlop’s solo (occupying the 3rd bar of their solos, respectively).  He then parodies the other two players’ immaculate chromatic runs with a sequence of blindingly fast nonsense runs (mm. 37, 38), and then sort of quotes a chromatic figure (m. 39) introduced by Grappelli in m. 25, but develops it with syncopation and starts it on a diff. scale degree.  This could be a stretch – decide for yourself.  The really cool thing is when he brings back something unexpected in m. 43 – he introduced a simple Bb to B natural motive in mm. 1-2 and 3-4 and develops it in mm. 43-44, having led into it with the nonsense figure of m. 37.

I really love what he does in m. 39-40 with that figure that jumps the 8ve over the barline, it’s really cool how he intentionally rushes the end of m. 45, and m. 47 is really damn creative/melodic.  I’ve gotta say that m. 39 to the end is my favorite 8 bars of the excerpt and does an amazing job of wrapping it up on a strong note.

One more thing worth mentioning is something all three solos have in common – tons and tons of scale degrees 1 and 5 on strong beats.  It might just be that this tune is so tonic-centric and hardly gets away from G for more than two beats at a time, but there is a distinct lack of guide tones going on. 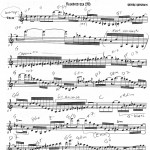 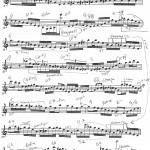 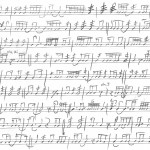