This track is off the album Sartori for a Hungry Ghost by local jazz/reggae group Parker Paisley (Park Evans, Guitar; Adam Wozniak, Bass; Brandon Wozniak, Tenor Sax; Pete Hennig, Drums), released April 2012 and recorded by Greg Schutte at Bathtub Shrine Studios in NE Minneapolis.  You should definitely check out the rest of this tune, and the whole album, and know that all four of Parker Paisley’s members (not to mention engineer/drummer, Greg Schutte) are hard-hitting Minneapolis locals who play with many other amazing Mpls bands such as: the Atlantis Quartet (Brandon and Pete), the New Primitives (Park), Dark Dark Dark (Adam), the Fantastic Merlins (Pete), Dave King’s Trucking Company (Brandon), and Firebell (Park).  I actually know Adam from back in highschool when we used to hang out and jam in our friend Tony’s basement, so it’s really cool to be reconnecting with him and doing what I can to promote his music.

Adam’s always had a really solid sense of time, and it truly shows up in this solo as he takes full responsibility for the bass’s rhythmic role in keeping the groove while crafting a beautiful melody and clearly communicating the harmony at every turn. This manifests in the fact that he resists tying over barlines, hitting every downbeat, while frequently tying over beat three (mm. 1, 3, 6, 10, 11, 12, 15, 17, 19, 22) for mid-measure syncopation.  You can see in my rhythmic transcription that I originally transcribed this solo with doubled note values, but decided on a very slow 4/4 which makes much more sense to my ears/eyes (but in the process of hand-translating it to halved note values I doubled one of the measures and ended up with my barlines offset by 2 beats–oops).

So one thing that makes this solo extremely pleasing to hear many times over is that it’s so damn consistent–as I mentioned above, he plays every downbeat, and almost every one of those downbeats is a chord tone (and if not, then it’s probably an important extension).  I’d guess that this is a manifestation of the bass player mentality of orienting the listener to the groove and underlying harmony, leaving little room for ambiguity or disorientation, which is necessary in groove-based music but tends to be absent in bass solos.  Another way Adam achieves clarity through consistency is by using a small collection of rhythmic motives, albeit in creative ways.  The first measure he plays here has 80% of the rhythmic material of the whole solo, and the additional material could be interpreted as simply development of these initial rhythmic motives.  What I’m seeing as the most important rhythmic constituents of the solo are the dotted rhythm (beat 1), the long tie over beat three, and a three-16th-notes pickup to the next measure.  In fact, every measure has at least two of the aforementioned three things with the exception of mm. 6, 13, 18, and 22, although each includes at least 2 references, or treatments of those initial ideas.  All in all, this is a very economic solo in terms of how much material is created vs. how much it’s developed, and although it can be exciting to play a ‘bag of tricks’ solo and throw a whole bunch of shit at the wall, it’s also extremely satisfying to hear a carefully-crafted solo comprised completely of ‘what sticks.’ 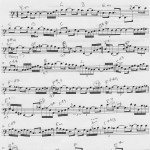 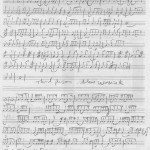