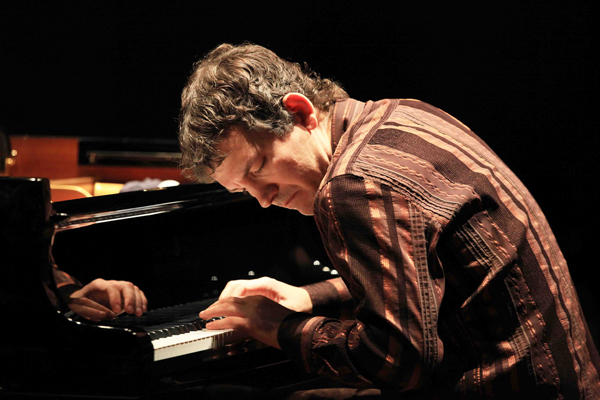 I remember the first time I heard this song.  I was in the kitchen cooking and I turned on the radio to Jazz 88 FM.  Brad was about a third of the way into his solo when I first tuned in.  I remember that almost instantaneously I knew it was him.  This was somewhat expected as once you come to know a great player’s voice it is as easily recognizable as your Mom’s.  But after listening for about 10-15 seconds or so, something else happened, something that perhaps speaks more uniquely to Brad’s playing – I knew he was playing the tune “Wonderwall”.  I had never ever heard this tune in a jazz context before, and the last time I heard it was probably in high school.  Furthermore all of the harmonies had been thoroughly changed.  But I knew, without a doubt that he was improvising on the tune Wonderwall.  And when his solo ended and he came back in on the bridge I just smiled, shook my head and chuckled to myself.

I chose to transcribe this piece for the same reasons I choose to transcribe any piece.  I view transcription as an attempt to peer through a window into a players mind.  Therefore I try to chose pieces that I feel not only personify a players style and approach, but ones that are transparent enough for me to get a clear look at what they’re trying to accomplish.

The solo is on a 16 bar form.  Generally speaking Brad chooses harmonies that are very open, many of them being sus chords, all while the bass player is holding down E minor(During the head and for the first part of Brad’s solo that is done in 7).  This allows him to expand on the melody and play “out”, which he usually does in the middle 8 bars, and then when he comes back to improvising on the melody for the last/first 4 it’s very strong.

A friend of mine once told me a story.  He said he was speaking to Brad after a concert at the Dakota and an album by Jimi Hendrix (Foxy Lady?  To tell you the truth I don’t remember) came up.  He said Brad went on a 5 minute tirade about how great that album is.  So, where am I going with this?  Well, I feel there are often times were Brad is shooting for the emotional quality of a distorted electric guitar in his playing.  Take measures 88 and 89.  The a/b flat crunch on the second beat of 89(I notate it is as a grace note).  To me, I really feel like he’s playing that note as a filthy blues guitarist would.  The “crunch” creates a feel of distortion and also the same tensional quality as a guitarist bending a note.  This “crunch” is present in many different forms throughout the solo.

How about the next measure, 90.  Here we see some more “guitar” feel.  The melody ends on beat 2.  But if you listen closely he subtly slides up to a G sharp.  I wrote it in as an eighth note because I couldn’t figure out a better way to notate it, so just looking at it looks as though the melody is ending on the and of 2, but I don’t think this is how he’s thinking about it.  Often times when guitarists end a melody, they’ll “slide” off their guitar(maybe I’m not describing this very vividly, I apologize), creating a certain feel.  But that slide is not intended to be part of the melody, just as the G sharp in measure 90 was not.  Also, many of the rhythms he choses in his left hand seem fitted for a guitar(maybe I’m stretching here).

One aspect of Brad’s playing that I love is that he is able to play “out” while at the same time playing very “lyrically”.  One of the ways he accomplishes this is by disconnecting his melodies from his harmonies.  Take measure 93.  Now I’m not exactly sure how he’s thinking about that chord (maybe c minor 9?), but I can definitely tell you how he’s not thinking about it – and that’s d flat major.  But look at the line in his right hand(maybe my favorite lick of the solo).  To me that’s d flat major.  But over c minor?  That’s the beauty of it.  By itself that lick is a great lick, but it’s not “out”, “hip”, “modern”… whatever.  He’s put it in a novel spot that creates interest to the ear, but at the same time it’s still a lick you can easily sing along to.  This solo is a beautiful example of that approach.

If you’re looking for errors, I’m sure you will find several…I have a day job.