This Thursday sokillingman.com broke 1,000 views, so thank you!  We’re really excited to have so many people interested in this project and we have all sorts of plans for development.  Here’s a little bonus post in celebration:

This tune is absolutely classic, and very well could have been the first tune I heard that convinced me that I understood what Gypsy Jazz sounds like.  It’s just that kind of recording.  While it’s not the whole picture by any means, this tune exemplifies a lot of the rules and conventions of the genre and has a very balanced ratio of variety to continuity.  So I figured this would be a great study tool for said reasons, and I love the solo, so it was a no-brainer.

One thing that sets this apart from the other Grappelli solo I transcribed (After You’ve Gone) is the featured rhythmic motives:

In Minor Swing the very first beat is an iteration of this rhythm, which is repeated in a similar melodic figure the first beat of m. 5 (m. 5.1).  It is notable that both of these examples kick off 4-bar phrases.  From there on it can be found throughout the solo such as mm. 6.2, 11.3, 13.1, 14.1, etc.  It can also be found in more subtle iterations such as beats 3+4 of m. 3.  Arguably.  It’s almost like an augmentation of the rhythm, but instead of just doubling the note values, the articulations are doubled as well.  Kind of a stretch, but it shows up multiple times in the solo.  Probably not consciously intentional, but more than likely there was an intuitive connection. 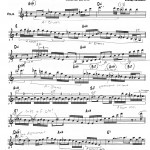 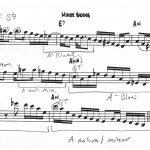