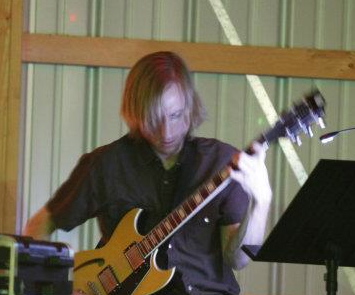 This is another track off the album Sartori for a Hungry Ghost by local (Twin Cities) jazz/reggae group Parker Paisley (Park Evans, Guitar; Adam Wozniak, Bass; Brandon Wozniak, Tenor Sax; Pete Hennig, Drums), released April 2012 and recorded by Greg Schutte at Bathtub Shrine Studios in NE Minneapolis.  I love listening to this entire album so definitely check it out–and if you like this solo then you’ll want to see/hear Adam Wozniak’s bass solo on the tune Third Persona, which I posted a month and a half ago. One of the really cool things about Park’s solos on this album is that they’re all different–in style and tone.

One of the first things that really jumps out about Park’s solo on this tune is that the phrasing is NOT straightforward at all.  You may notice that I have double bars denoting every 4 bars, but this is by no means the only way to interpret the phrasing here.  First of all, Park leaves the first measure open and drops another downbeat before introducing a little subphrase–but to me these two bars (mm. 2-3) sound distinctly like they belong in the last two bars of a phrase since they resolve so neatly.  Then in m. 4 (last bar of first phrase) he plays a lick that sounds like it should be in the first bar, since it sounds introductory and leaves the harmony up in the air.  At this point the phrasing is completely on its head, but Park clears the air with the next 4 bar phrase (mm. 5-8) by laying down a perfectly formed thought; bars 5-6 introduce an idea and the subsequent 2 bars (7-8) chop up, develop, and close out the idea.  The cadence of bar 8 leads right into the next phrase (also clearly formed) which introduces a lot of new material and a new chord progression.

The next really weird thing is when the 3rd phrase ends with an Ab7 and the next phrase begins with the same harmony–it’s always a bit disorienting to move from one phrase to another without a change in harmony, especially when there’s harmonic movement within the subsequent phrase (i.e. phrase #3).  So basically we’re expecting the G7(b9) to come back in bar 13 but it doesn’t.  And it doesn’t come back until m. 19, which is the 2nd half of a phrase, rather than the context in which G7(b9) first appeared, which was the 1st half (mm. 9-10) of a phrase.  So to my ear this could mean that measures 13-18 are a phrase of six bars, followed by a short ‘interlude phrase’ (mm. 19-20) of two bars, leading into the key change.  Totally weird, and a little disorienting, but music is all about tension and release/dissonance vs. consonance, and in this case the cognitive dissonance of weird phrasing builds up the tension.  This may explain why I perceive the resolution at mm. 24-25 to be the most satisfying moment of this solo–or it could be that it’s just a ridiculously beautiful/intelligently tuneful riff.  I dunno, but it’s awesome.

Other than that formal stuff, my below analysis included some guide tone movements, but those are only really important once we get to the key change (m. 21) where the harmonic pacing picks up–and I’ve also mapped out some rhythmic/motivic development that is knit throughout the solo.

The rhythmic motive in question is first introduced in m. 5 where it already begins to morph into the next measure.  By and large, this motive is characterized by two sixteenth-notes plus an eighth-note (not necessarily in that order):

It shows up again in m. 7 in a stripped-down, abbreviated, and rearranged form–but with the exact same notes as m. 5:

Then the fun really begins when it shows up in m. 10 in a new tonality with the intervals inverted, and the Eb/F has been bumped up to an F/G.  It’s developed in a similar way even further in the next measure (m. 11) and then digresses into some nasty-fast blues licks:

It’s brought back briefly in m. 14 in an especially angular form:

But then it definitely comes back in m. 22 in a whole new harmonic/melodic context:

The final statement of the motive is the very last two beats of the solo (m. 28) which is a rhythmic inversion of the motive as found in m. 10, which I think brings enormous closure to the solo.

And that’s only scratching the surface of what makes this solo so killing.  Man.  And, of course, I feel the need to mention that the aforementioned motivic development was not necessarily intentional in the conscious/calculated sense of the term; likely, Park had some motive in the back of his mind that influenced some/all the aforementioned examples.  I just get the idea that some students of improvisation see the academic/analytical side of music and get the impression that it’s this kind of calculated thinking that goes into forming a solo, but that’s not necessarily/usually the case.  This is just one way to retrospectively work through and understand music that’s already been played.  Same old disclaimer, but I think it’s always worth restating, as it’s a very important distinction to make clear. 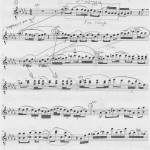 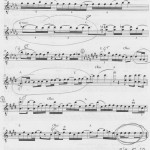 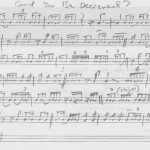