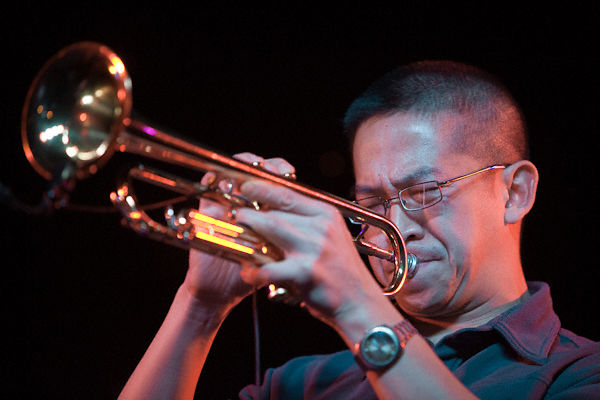 I just bought this record and when I heard this track, I immediately thought of transcribing some of this stuff for SoKillingMan. Vu picks a few of the most standard standards and plays them as the first few tracks of his record Leaps of Faith (2011). What’s great about it is that Cuong Vu does his Cuong Vu thing over these tunes. These old, overdone, dried-out standards sound like they could be just another original on his new album. Listen closely though, and the form, melody, and harmony become obvious in the tunes we know.

Really, it’s just great because this is a tune we’ve all studied. We’ve all (if you haven’t, it’s time) learned this tune by memory, we’ve all transcribed solos over this tune, and a lot of us have probably tried to play it in a weird way. In 7/4 or whatever. It’s a perfect case study as a song and as a solo because Vu catapults this standard in to the new age with straight eighth grooves and REEEEEEVVVVEEEERRRRB!!! Which is totally Cuong Vu’s “thing” (obviously there’s more to him than reverb) and is awesome.

You’ll see based on the transcription, except for the very slow harmonic/melodic tempo (they play the melody slower than usual but with a double time straight eighth groove beneath it) that Cuong’s solo, at a glance, looks like it could have come off a straight ahead jazz record. He does all of the things a soloist might do at a jam session, but he does it in a unique sort of way that breathes new life in to an old tune.

At times this recording gets so loose time-wise during Vu’s solo that it’s hard to tell if they are all on the same page. Inevitably someone steps out and decides where they are and sometimes that’s a half a beat from where Cuong was in his line, and sometimes it’s a whole beat later, and still sometimes it’s right on. You can hear this phenomenon every time they get to the bridge (ii V in Gmaj, ii V in Emaj) because they’ve planned to get loose during those sections. Other than those situations, Cuong’s lines fall right in to the groove of the rhythm section. He plays with rounded edges, so to speak, so the attack to his notes are not as bright as say, someone who isn’t playing in to a reverb bath, but it’s clear that it doesn’t affect his ability to play with a refined, defined sense of time.

The real magic in this solo is in those loose bridge sections. Cuong switches from fast be-bop/modern chromatic lines to beautifully loose major melodies (see mm 87-92). He plays a heart-wrenching melody and then flies back in to more and more sixteenth notes.

One of the benefits of transcribing like this once every few weeks is that you start to see patterns and similarities between the person you’re transcribing and the others you’ve done in the past. This solo reminded me lot of the Ingrid Jensen solo I did for this sight a couple months ago. Their lines are similar in the way that they use chromatics and CATs (chromatic approach tones, often surrounding a target note with half-steps) to extend lines and build tension. They also use many of the same patterns (check out Ingrid’s solo and see for yourself).

Enjoy this wonderful solo. Go buy the album, it’s worth it.

Adam Meckler is a professional trumpet player and composer from the Twin Cities, MN. Check him out at www.adammeckler.com – Follow Adam Meckler on Twitter at @AdamMeckler