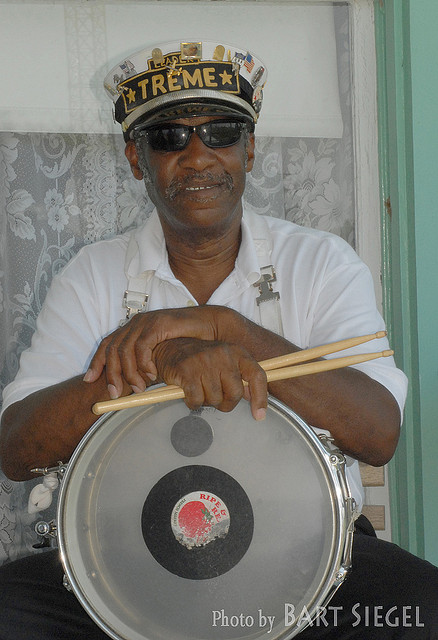 Benny Jones is the snare drummer and bandleader of the storied Treme Brass Band.  Born and raised in New Orleans, Jones has been around brass band music his entire life.  His feel and concept for traditional jazz and second line rhythm has influenced a legion of drummers including Herlin Riley and Stanton Moore, among others.

Jones’ snare work on Treme’s recording of ‘When My Dreamboat Comes Home’ illustrates the phrasing and concepts that have become the standard for snare drummers playing this music.  The following analysis is derived from two 32-bar sections, the first being the vocal melody on the in head and the second being the opening trumpet chorus that follows.  Studying two choruses will allow for comparison and the development of any trends or patterns in Jones’ playing.

The first few bars of the vocal chorus find Jones playing a pattern that he will use repeatedly over the course of the transcriptions.  This combination of quarter notes and five-stroke rolls complements the two-feel of the song.  (It should be noted that all of the rolls are multiple bounce, or buzz rolls, as is typical in traditional second line snare drumming.)  The pattern also serves as the first bar of a two-bar phrase that is the main ingredient in Jones’ playing, thus creating a sort of call and response within the snare drum part itself.  The second bar varies from pairing to pairing, though there are a few choice rhythms that appear more than once.  For example, the rhythm that first appears in measure 6 of the vocal chorus also appears in measures 10, 20, 22, 26, and 28.  (While Jones shifts the placement of buzz strokes and accents, the shell rhythm remains the same.)  There are other examples of recurring consequent phrases in both choruses, all of which demonstrate Jones’ two-bar phrasing.  The only instances in which Jones breaks the pattern are at the conclusions of the two sixteen-bar phrases that comprise the full chorus.  In both choruses, measures 15-16 include a two-bar fill, while measure 29-32 include a four-bar fill, and coincidentally, the fills are identical from one chorus to the next.

There are a handful of similarities and a few differences between the two choruses, both of which contain a valuable lesson in patience, phrasing, and musicality.  The standard pattern discussed above (quarter notes, five-stroke rolls) appears in 14 of 32 bars in the vocal chorus and 11 of 32 bars in the instrumental solo chorus.  The higher frequency in the vocal chorus is likely due to Jones keeping his playing slightly simpler so as not to cover up the singing.  The remaining bars offer some insight into the differences between Jones’ playing behind a vocalist and what he does behind an instrumentalist.  In the vocal chorus, aside from the aforementioned fills , there three separate rhythmic variations.  (The rhythms in mm. 6, 12, and 18)  In the instrumental chorus, there are seven separate rhythmic variations, those in mm. 2, 4, 6, 8, 10, 12, and 14.  This shows Jones’ discretion between the melody (vocal) and the improvisation (instrumental).

The content in these choruses is not only indicative of quintessential second line snare drumming concepts, but also a good study in general musicality.  Benny Jones has long been a popular figure in New Orleans brass band music, and this snapshot of some of his work shows his sense of musicianship on the snare drum.