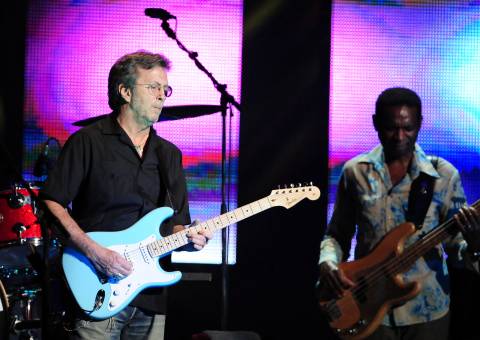 I had always grown up listening to Eric Clapton, but I first came to know his music through the more mellow later stuff like MTV’s “Unplugged” from the early 90s. I also listened to compilation albums that treated the beginning of his career as having started in the 70’s with “Derek and the Dominos,” but it wasn’t until fairly recently that I really even knew about what even came before that: Cream. Clapton’s sheer virtuosity and extended soloing with his late 60’s British blues-rock supergroup forced many critics of rock music to stop dismissing it as noise, and start taking the medium seriously. All 3 members of the band were dedicated musicians who saw no draw in hopping around the stage, coordinating outfits, or smashing equipment to create a spectacle. Their pure devotion to the music made for stunning results on the 4 albums they released, each one seeming to push an already high bar progressively higher. After only 2 years together, Cream played their final live concert at London’s Royal Albert Hall in November of 1968 to a packed house in mourning.

Fast-forward to 2005. Compelled by his personal curiosity as well as years of people asking about what Cream would sound like today, Clapton proposed a reunion concert at the Royal Albert Hall. Jack Bruce and Ginger Baker accepted, and the recordings culled from the 4 concerts to make an album show that the raw chemistry is still there. This isn’t the MOST killing solo on the album by far, but is just one example of how killing an average solo is for Eric Clapton. This tune is a blues standard, and the blues is his bread and butter.

If you’re learning this one, listening is a must for all the subtle bends and in-between blue notes. The transcription is written in a fairly vanilla fashion since notating it hyper literally can make it more ugly than useful.”

[Editor] – Thank you very much to Brad Colfax for sharing this great Clapton transcription!