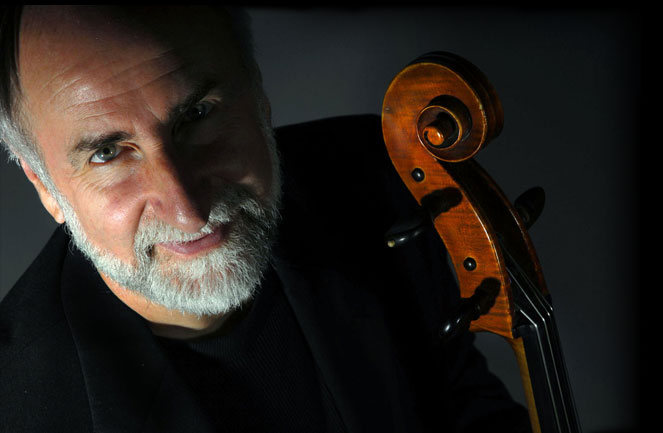 I’m FINALLY posting a cello solo, and since I’m an improvising cellist, it’s about time. There are actually quite a few fabulous cello-playing improvisers out there, and Eugene Friesen is a leader in the field.  This whole album, Carnival of Souls, is full of cello techniques and tone colors that you’ve probably never heard, some of them pulled from the acoustic bass, or even guitar lexicons.  As a trio member, Friesen excels at holding down the rhythmic accompaniment with arpeggiations and intricate basslines, as well as soaring, lyrical melodies when Howard Levy takes over the accompanimental role.
This solo is unlike anything we’ve posted on this blog thus far, as the style is rather far removed from that of Jazz and is closer akin to Indian classical music–and I’m VERY sorry to those of you playing Bb and Eb instruments because I know how much you guys love playing in B and F# major, respectively.  There is no chord progression during the solo, and not a single note is played outside of (concert) D Lydian.  Also, Velez (percussion) and Levy (piano) hold down a fantastic rhythmic accompaniment based off an ostinato pattern, or tala which I’ve notated in the upper-lefthand corner of the analysis below (1st page).  Since the solo is 100% modal I didn’t do the typical analysis with guide tones and scale fragments/patterns, so I had to find something else to do with my time; the first thing I did was to write in all the slurs and harmonics I could discern.  The harmonics are only practically useful to a cellists/violists (and maybe violinists/bassists), but the slurs can be implemented by any instrument, and are very rhythmically interesting in any case.
The other thing I notated is the rhythmic patterns that Friesen seems to be communicating, although as usual they’re to be taken with a grain of salt since it’s impossible for me to know what Friesen was thinking when he played this solo.  In some places it is very difficult to tell if a rhythm is a syncopation over an implied duple (mm. 25-27), or if it’s actually a triple grouping, but I think it’s a very useful exercise to follow along in the music while counting 2’s and 3’s out loud, even if 40% of them were judgement calls.  I’ve notated this with slashes and triangles: a slash indicates a grouping of two 8th-notes, and a triangle indicates a grouping of three 8th-notes.  Friesen’s rhythmic patterns rarely line up with the tala for more than three groupings in a row (by ‘groupings’ I mean the chunks of two or three 8th-notes), and sometimes his groupings span barlines and obscure the underlying downbeats, such as mm. 8-9, 12-13, 16-17 and 28-33.  This makes the cello solo sound very free and detached from the strict tala.
All in all this is a beautiful example of lyrical and modal cello improvising, as well as some really cool use of harmonics and string crossings.  If this is the first cello solo you’ve heard, I hope it’s piqued your interest and that you’ll explore further!  Some other improvising cellists on my radar are Eric Friedlander, Matt Turner and Mark Summer, although I know there are many more that I have yet to discover, so if anybody has suggestions as to who I should listen to/transcribe, please come forward! 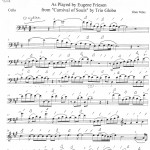 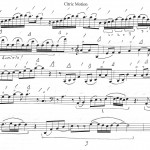 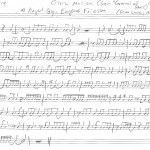