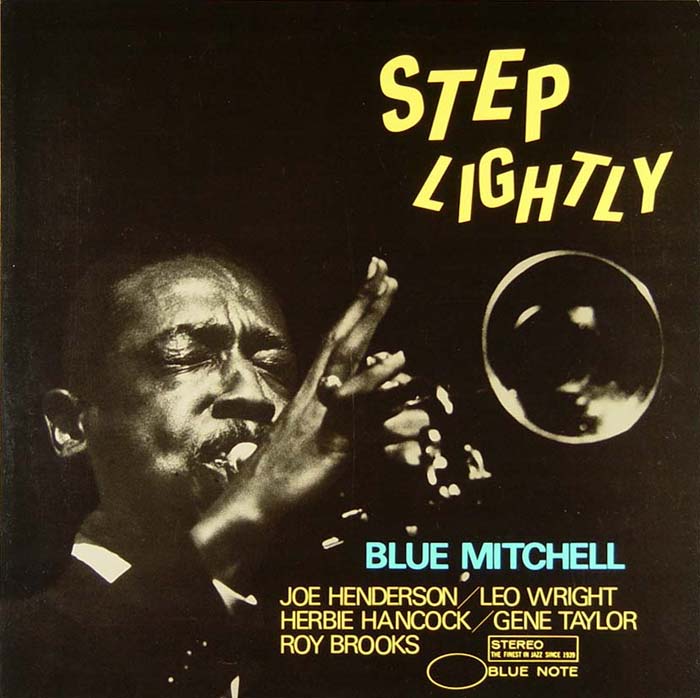 With transcribing the jazz language I’ve always been fascinated with the process of figuring out what the great players of the 50’s and the 60’s played. With such ease and flow their language of be-bop, and blues just feeds the ears of our generation with so much substance that I feel we sometimes miss out on. I’m a young musician trying to study this music and hopefully begin to understand it a little bit more with everyday that goes by. At school I try to transcribe as many solos as I can. This semester my trumpet teacher Adam Rossmiller came across this solo of Blue Mitchell’s and told me to check it out and transcribe it. So I did!

Blue Mitchell’s solo off of the album Step Lightly is a great source of high-quality jazz language.This August, 1963 session was Blue Mitchell’s first as a leader for Blue Note, but remained unreleased until 1980, by which time the soulful trumpeter had already passed away. Ironically, it’s also never been issued on CD in the US, and this 1994 Japanese edition is currently the only way to own it in that format. While Mitchell’s later BN dates with his own working quintet are rightly considered his best, the lineup on STEP LIGHTLY (Joe Henderson on tenor, Leo Wright on alto, Herbie Hancock on piano and longtime Mitchell associates Gene Taylor and Roy Brooks on bass and drums respectively) offers a unique opportunity to hear him fronting what was, in retrospect, almost an all-star band. He combines the use of the blues, the pentatonic scale, ii-V-I’s, and be-bop language throughout the solo to really give the listener a plethora of jazz substance. Blue Mitchell also throughout uses what some call digital patterns to either lead into another idea or to another guide tone. Here is a little bit more specific analysis.

Third chorus:
Measure 24: chorus starts on beat four with a nice descending line resolving to the downbeat of the next measure.
Measure 28: Blue uses another great ii-V-I lick in the same part of the form. Except the lick is different (R-3-5-7-13- descending triplet to 3-7)
Measure 28 beat 3 – 30: A hip descending 16th note triplet sequence leading to the key guide tones in the chord. It eventually resolves to the 5 of the four chord.
Measure 35: Blue restates the blues motif he uses to open the solo with.

Fourth chorus:
Measure 37: Blue pivots off of the concert C using syncopated 16th note triplets again.
Measure 40: standard blues lick. Blue does an 8th note triplet between the major and minor 3rd of the D7.
Measure 42: a little bit like measure 14 and 18 but a little bit more complex of a figure.
Measure 45 – 48: are almost two identical phrases. The only difference is that in measure 47-48 Blue adds a few 16th note triplets to off set the rhythm to add more rhythmic variety to the line. Beat three of 48 Blue does a beautiful b9 to the #9 triplet figure.
To finish he resolves to the tonic with (R-3-13) which can also be seen as him outlining b-minor over D7.

What a great solo!