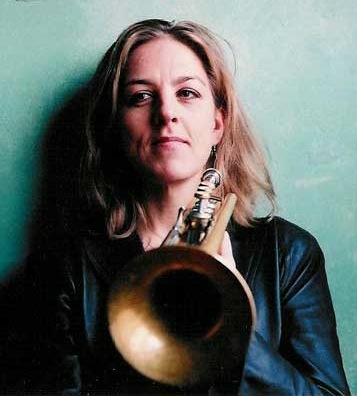 First of all, I’d like to send a quick shout-out to Darcy James Argue, who wrote this award winning (Charlie Parker Composition Award, 2004) piece, and is the leader of currently my favorite big band record, Darcy James Argue’s Secret Society, Infernal Machines, on which this Ingrid solo is lifted. I am constantly inspired by Darcy’s music, and he is a big influence on my own big band writing.

Now on to the good stuff. I first heard Ingrid Jensen while I was doing my jazz studies undergrad degree at Lawrence University. Maria Scheider was coming to town to conduct our big band, and I had the roll of playing the second part, which included solos by Ingrid, among others. I really had to study and get in the head of Ingrid to better understand how to improvise over a big band with such prowess, so I went out and bought all of her records and soaked it in. Ingrid is one of my favorite trumpet players. I nearly made it through four years of school without ever hearing of her! Truly a shame she isn’t more widely recognized in the jazz and trumpet communities.

At any rate, she’s killing and I love this solo. I came across DJA when I was doing my Masters at the U of MN and playing in the Jazz Band there. We did this tune and naturally, I was pumped to get inside Ingrid’s head and slay the solo myself.  When I first heard it, I figured it was impossible to transcribe. After buckling down and putting in about 9 hrs of transcribing last week, I found that I was right. It is impossible to transcribe.

That doesn’t mean I didn’t try!

Seriously though, this was very hard. Obviously not impossible. Like some solos I’ve transcribed for this site in the past, I had to make some decisions that I’m not super fond of. There are moments during the solo, such as mm. 95 and mm 154-157 where it’s clear to me that Ingrid is going for a gesture or shape, rather than playing specific pitches. It’s clear when Ingrid is being intentional about note choice, and when she is going for an effect. The aforementioned measures are more gesture than specific pitches, so I simply noted (particularly in 154-157) target pitches with glisses in between each pitch. There are times when I went ahead and notated these parts, such as mm 142-144, but in this instance I was able to get some semblance of pitch notation by slowing down the solo to a considerably slow tempo, something I don’t usually like to do. Kind of a purist in that way. I actually downloaded Transcribe (transcription software) just for the middle/end of this solo.

There are chord changes, but as you can see half of the solo is over a pedal E, which gives Ingrid quite a bit of freedom with being able to play in and outside of the tonality, something she is particularly skilled at.

One of the skills it takes to play in a modern big band setting is to be able to build a solo over the course of a long period of time. Many modern big band composers are writing this way now, where nearly the entire chart is a solo section. It is common amongst many of Bob Brookmeyer’s students, and Darcy James Argue is no exception. It even says in Mr. Argue’s chart “Pace yourself, long blow” in the solo trumpet part. Ingrid forms her solo and builds the intensity brilliantly from start to finish. She often uses the backgrounds (which are like another piece of music in and of themselves) as the cue for when to step out and when to step back.

Ingrid plays with the time in her solo as well. You will hear her push and pull the time with her eighth notes, or simply float over the time without concern for playing inside it. Manipulating time as a soloist is an extremely underrated and under-used tool. A professor of mine used to make us push and pull our swinging eighth notes over a jazz standard to experiment with playing in the middle of the beat, near the front, laying back, or completely outside the time. It’s a great exercise because it forces you to confront your own internal time clock, and fix whatever problems it may have. Probably the biggest problem with beginning and amateur (even some professional) improvisors is a lack of understanding when it comes to time (or feel). One of my heroes of the trumpet, Dave Douglas, talks about this very thing in his master classes, only he approaches it by way of exercising your time abilities using the metronome on different beats and playing and improvising over a tune. For instance, put your metronome on 2 and 4 and play a tune. This is the most basic form of the exercise, but right away you’ll notice just how bad your time really is. Once you’ve worked on 2 and 4, move the metronome to just beat 4, or just the and of 3, or make it the dotted quarter note, etc. You get the picture.

Just listen closely to the last 22 bars or so of Ingrid’s solo. mm 203-204 should have “Lay Back” written above the notes there. Ingrid starts the final movement of her solo playing right in time and using a now familiar theme to start phrases: repeated notes (pretty sure she is using alternate fingerings on most of these, see: mm 23/24, 68/69, 136/137, 191/193, 209/210). Ingrid ends the solo by releasing all of the tension she has built up playing chromatically, side slipping etc, by playing a simple E Major melody (mm. 201-204).

Beautiful work by a beautiful soloist. It’s no wonder Ingrid is in high demand among big band composers.

Since this is a track from Darcy James Argue’s record, it would be nice of our readers to check out Ingrid’s stuff and purchase her records, since we are dealing with her brilliant solo. At Sea is a great record, and I also enjoy her work with her band Nordic Connect, which features Ingrid’s Sister on Saxophone.

Adam Meckler is a trumpet player, composer and educator in Saint Paul, MN. He holds Bachelors and Masters degrees in Trumpet Performance and Jazz Studies. He is a top call trumpeter in the Twin Cities, and has toured all over the Country and World. Check out his stuff at www.adammeckler.com. Check out his big band at www.amorchestra.bandcamp.com, follow him on Twitter at @AdamMeckler.